Everybody knowns the story of Mao’s Last Dancer but not everyone is aware of his current career as the Artistic Director of the Queensland Ballet. I was lucky to get the opportunity to talk to him about the new production of Swan Lake in May 2017. Then I was invited to watch a rehearsal which I really loved. It was heartbreaking!

It is the first time that Swan Lake ballet is shown here under your direction. You needed time to get the company technically, emotionally and artistically ready for Swan Lake. What are the challenges of Swan Lake?

Swan Lake is one of the most challenging ballets for many companies to do. The standard of all dancers has to be very high across the board, and not just rely on the principle dancers. Each one of the swans has to be really good – not just technically good, but artistically, emotionally and musically. Everybody has to be in tune with each other, while still portraying the feeling and character of Swan Lake.

When I first came to the company it did quite a lot of neoclassical, contemporary ballets. It took me four years of patience to get my company to a certain standard to do justice to this beautiful ballet. I feel that now is the right time to present Swan Lake.
Nutcracker and Cinderella, which we have previously performed, are much easier to dance. Relatively speaking, Cinderella is a simpler ballet and a smaller production, which doesn’t require as big of an ensemble as Swan Lake.

You chose the choreography of Ben Stevenson, in which you yourself performed in 1985. Tell us about this particular version.

Not only am I familiar with it because I danced it many times, but I obviously love it. I helped Ben Stevenson revive it for the Ballet de Santiago in Chile, for the Marcia Haydée‘s company in the early 90‘s.

There are not many Swan Lake choreographies out there that really respect and keep the beautiful classical tradition. Ben is a very clever choreographer, strengthening the storyline by emphasising the prince‘s story: Both his marriage and kingship were forced upon him. Unhappy with the pressure imposed on him by his mother, he wanted to get away from everyone. That’s why he was alone by the lakeside when he met Odette.

Ben also incorporated more dancing for the prince – one beautiful solo with the queen mother, a Pas de Six at his birthday party scene and a stunning solo in the 2nd act before Odette‘s solo. Finally, Ben created a heart breaking 4th act pas de deux when his love is lost.

To keep an emotional connection with the audience, Ben cut the 3 intermissions by combining the first 2 acts. This is obviously much more challenging for the dancers, but very clever to keep the flow. 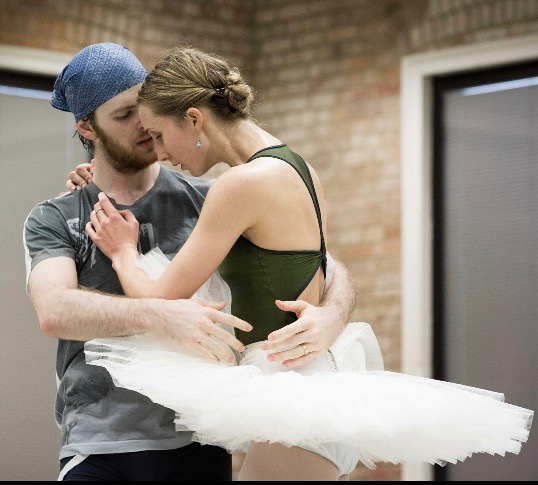 How do you balance classical ballet and contemporary dance performances to attract both younger and older audiences?

It is a balancing act as a director to program well. Finding the right balance is key, particularly for a classical ballet company. You can’t keep doing all classical ballet. It is important for any company to keep pushing the boundaries – you have to keep renewing to keep it fresh.

Dancers now are so much more versatile. I am looking for dancers who are good in both. They should be able to do all of these exiting choreographers out there well, like Wayne McGregor, Christopher Wheeldon, Liam Scarlett, Christopher Bruce and Balanchine, who all brought their own sense of style and signature into the dance.

As a director I need to make sure to not only entertain the audience, but also educate them. I want to give them the classical, contemporary, as well as the neoclassical education.

As partitioner of this beautiful art form we have to constantly introduce new things to our audience, with Liam Scarlett coming on board as artistic associate. We are nurturing our new choreographic talents through our dance dialogs program.

We did a Bespoke program at the Powerhouse at the beginning of the season which was supposed to attract the contemporary audience. Each choreographer cleverly used the lighting and open space to create their works. It was a roaring success. We could have tripled our performances and still sold out. In matter of fact, a lot of our season ticket subscribers, which mostly include older generations, loved it. Therefore, it is no longer the case that older audiences only like classical ballets.

We also do a „My First Ballet“ series to plant a seed and fall in love with ballet as an art form for children aged 3 – 8 years. We do Cinderella, Peter Pan – all children friendly ballets, which still provide wonderful value for adults as well. I like the idea of bringing 3 or 4 generations to a ballet to share the experience on a different level. I love this kind of balance.

Great event for everybody: A sneak peek of the beautiful swans

Liam Scarlett, a global Star choreographer, became an artistic associate of the Queensland Ballet. What kind of new work will he bring into your program?

He is one of the most exciting, dynamic, creative and talented choreographers today – a new generation of choreographers. I can’t tell you how excited I am to have him be a part of the Queensland Ballet. Besides the Royal Ballet London, this is his second home. The plan for him is to create a lot of new works in the future for us, as well as existing works, such as Midsummer Night‘s Dream, a co-production of the Royal New Zealand ballet and Queensland Ballet.

You have got a very young company. How do you select your ballet dancers? How much talent, discipline, skills and hard work is needed?

I love dancers with versatility, adaptability and open mindedness. While the body is important, an eagerness to learn, improve, to be hungry and become the best you can be, is much more important to me. I love dancers who can’t get enough of ballet, who are totally passionate about the art form. Ballet is not a job for them, it is truly love. I also prefer dancers with great work ethics, hard workers, because I truly believe talents will come to nothing without the hard work behind it. Talent will only become something worthwhile – something tangible, something exciting – if you are willing to work with the talent you are given.

More about Li Cunxin, Artistic Director of the Queensland Ballet

Li Cunxin has had a long and diverse career as an internationally acclaimed dancer. He was appointed as Queensland Ballet’s fifth Artistic Director in July 2012. At the age of eleven, Li was selected by Madame Mao’s cultural advisors to attend the Beijing Dance Academy. In 1979, he joined Houston Ballet as an exchange student and went on to achieve the rank of Principal in 1982. Amongst many awards and accolades, Li won two silver and one bronze medal at three international ballet competitions, and two Princess Grace Awards.

He moved to Melbourne in 1995 with his wife, dancer Mary McKendry, to join The Australian Ballet as a Principal Artist. Li retired from dancing in 1999, at the age of 38, but maintained his strong ties to the ballet community.

Following his performing career, Li worked in the finance industry as a senior manager at Bell Potter, one of the largest stockbroking firms in Australia. Until his appointment as the Artistic Director of Queensland Ballet, Li sat on the board of The Australian Ballet from 2005 and the Bionics Institute.

In 2003, Li published his international best-selling autobiography, Mao’s Last Dancer, which has received numerous awards and was adapted as a feature film in 2009. Li was Queensland’s Australian of the Year 2014.

Li’s contribution to the arts continues to be acknowledged despite his retirement from the stage. In 2008 Li was awarded an Honorary Doctorate by the Australian Catholic University for his contribution to dance and literature. In 2015 he was named as one of the Asia Society’s Asia Game Changers recognising remarkable people who have made a difference in the world. Li was honoured for his art, his courage and his cultural diplomacy. In 2016 he was awarded an Honorary Doctorate from Griffith University for his services to ballet, the arts and the wider community.