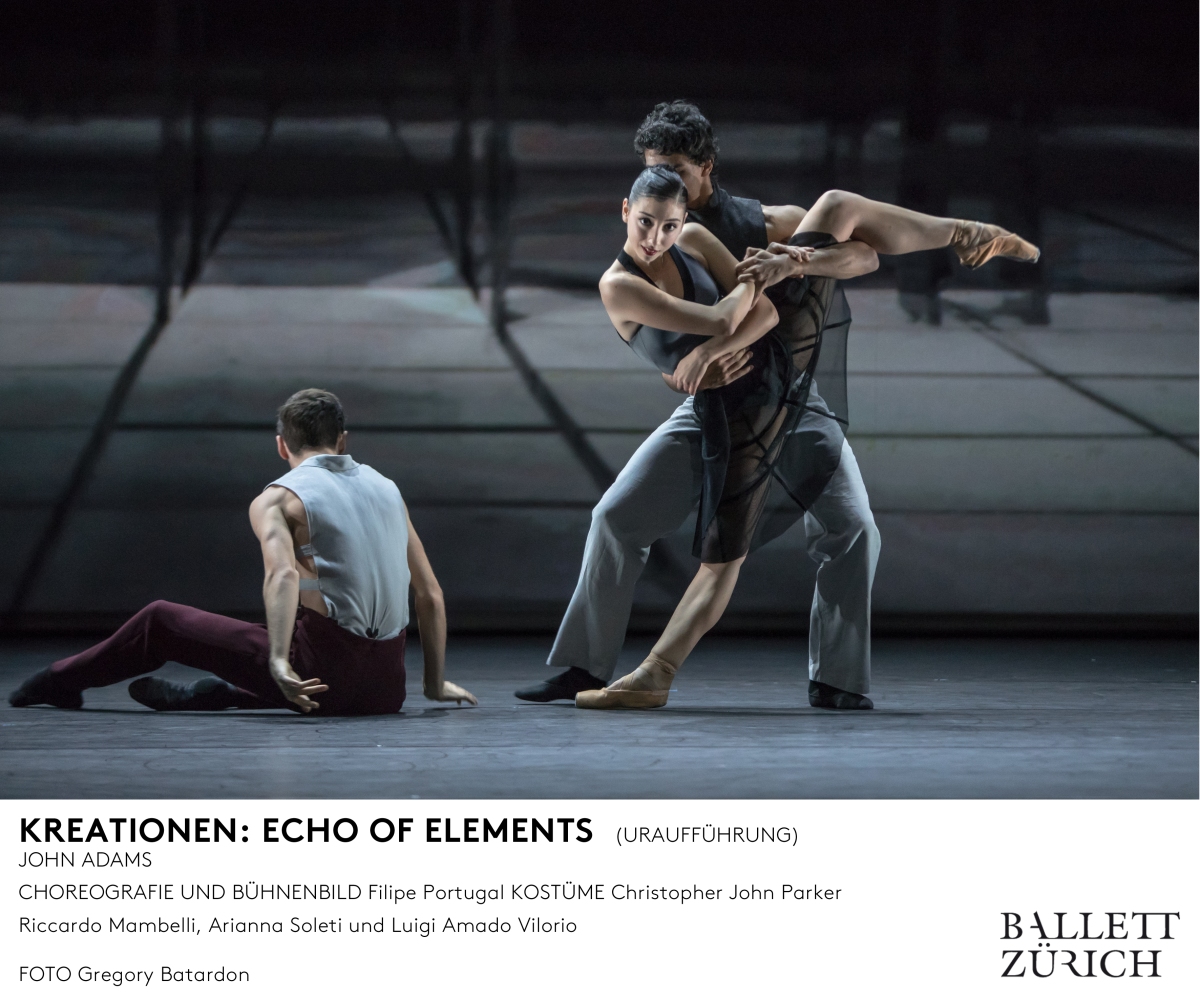 As we all know a lot of rehearsals are needed before the ballet dancers are ready to perform on stage. Usually it takes weeks before the opening night.

Applying corrections and giving feedback is the task of the ballet master. He is a guide for the dancers to develop technically and artistically. Some critiques can be fixed immediately, but most take time, concentration, and hard work to improve and achieve perfection.

In the video you can watch the Junior Ballet Zurich rehearsing the choreography of Filipe Portugal „ECHO OF ELEMENTS“. This ballet had its world premiere on 20th October 2018 at Theater Winterthur and then was presented in 2019 at Opernhaus Zurich. The next performances will be on 8th and 21st March 2020 in Zurich.

This trailer shows the performance of ECHO Of ELEMENTS.

More about the Junior Ballet Zurich

Since 2001, the Junior Ballet has established itself as a pre-professional platform. Young dancers from all over the world are given the opportunity to make the transition from the end of their ballet education to their entry into the full professional life. In the context of an engagement lasting no longer than two years, they work together with the members of the Zurich Ballet to dance with them in selected performances of the repertoire and thus collect the stage experience necessary for a dancer’s run. This season, the Junior Ballett will be presenting Kreationen, choreographies by Louis Stiens, Goyo Montero and Filipe Portugal (Text of the website Junior Ballet Zurich opernhaus.ch).

Biography of Filipe Portugal (by opernhaus.ch)

Filipe Portugal studied in Lisbon and, after his first engagement with the Portuguese National Ballet, was engaged by the Ballett Zürich in 2002. Here he danced solo roles in numerous choreographies by Heinz Spoerli (including Cinderella, Der Nussknacker, Schwanensee, Don Quixote, Coppélia, Giselle and Ein Sommernachtstraum). From 2009 to 2011 he was principal dancer at the Portuguese National Ballet. He returned to the Ballett Zürich in 2011 and has starred in numerous ballets by Christian Spuck, including Pater Lorenzo in Romeo und Julia, King Peter in Leonce und Lena, Doctor in Woyzeck, Karenin in Anna Karenina and Spalanzani in Der Sandmann. He has also appeared in choreographies by Mats Ek, Jiří Kylián, Hans van Manen, William Forsythe, Douglas Lee and Martin Schläpfer. Parallel to his dancing career, Filipe Portugal works successfully as a choreographer. Among his most recent works for the Ballett Zürich are Dialogos to the music of Swiss jazz musician Nik Bärtsch and disTANZ. He also choreographs for the Charlotte Ballet (USA) and the Stuttgart Noverre Society. In 2014 Filipe Portugal was awarded the «Tanzpreis der Freunde des Balletts Zürich».

I danced ballet as child, albeit with little success. Despite this, my passion for ballet and dance has carried into adulthood. I still love to watch ballet performances and would love to share my passion with you.
Schließe dich 1.136 anderen Abonnenten an