I am interested what are yours. Please tell me. Mine is definetely the Black Swan Pas de Deux By POLINA SEMIONOVA and FRIEDEMANN VOGEL.

Coming back to the TOP 5 of Royal Ballet:

Dramatic and romantic moments in ballets including Swan Lake and Romeo and Juliet are classical dance’s beating heart. 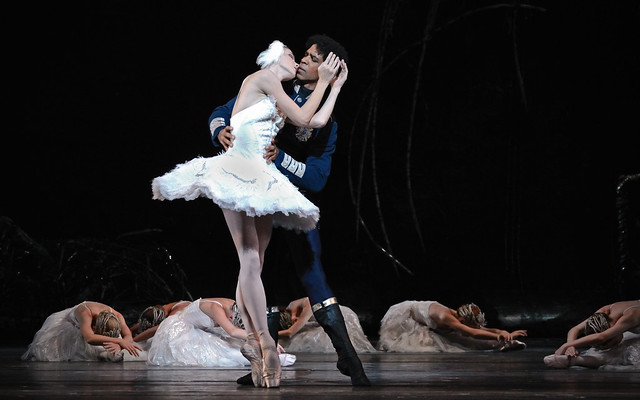 Pas de deux (dances for two) lie at the heart of many a ballet. They can be great technical showpieces, but they can also be dramatically potent – and, of course, are often both at the same time. Here are a few of our favourite examples of pas de deux from across The Royal Ballet’s repertory:

Petipa and Ivanov’s Swan Lake features one of the most famous of all pas de deux. In the ‘Black Swan’ pas de deux the evil Odile seduces Prince Siegfried with her brilliant technical display, paving the way for the tragedy ahead as Siegfried’s affections unwittingly transfer from Odette to Odile. Though it is most famous for its dazzling 32 fouettés, this pas de deux also serves a key dramatic purpose, changing the course of the ballet’s plot.

In Giselle, on the other hand, it is already too late for the heroine when she and her love dance their final pas de deux. Giselle has already died following her abandonment by Albrecht: it is only Giselle’s spirit, deep in the woods, that remains. But there is an emotional significance to their final dance together, as Giselle forgives Albrecht for the wrong he has done her. What’s more, the pas de deux prolongs the action until dawn, meaning that Albrecht, who is trapped in a dance to the death, has the chance to escape.

Pas de deux are often integrated seamlessly into the narrative of Frederick Ashton’s ballets – not least in Marguerite and Armand, his sensationally dramatic take on the story of La traviata. The lead couple partner each other many times over the course of the work, but their opening pas de deux is particularly explosive, as Armand bursts in to the party and declares his love. Even as signs emerge of the illness that will contribute to Marguerite’s downfall – that ominous cough is ever-present – the two of them are swept away with passion.

An emphasis on emotionally searing pas de deux is something that unites Ashton’s work with that of Kenneth MacMillan, who went straight to the pas de deux when starting a project. In Romeo and Juliet, three of them – one near the end of each act – chart the course of the young lovers’ relationship, from the first flush of love, through the sorrow of parting, to devastation when Romeo finds what he believes to be Juliet’s corpse. The first-act Bedroom pas de deux is perhaps the ballet’s most famous sequence, a breathtaking evocation of the heady ecstasy of newfound love.

MacMillan’s work can sometimes seem far removed from the world of Petipa and Ivanov, but perhaps they are closer together than we think. In his three-act Anastasia of 1971, MacMillan gave the central pas de deux of Act II to a historical character: Mathilde Kschessinska, who as prima ballerina assoluta of the Mariinsky Theatre danced under both Petipa and Ivanov. Her pas de deux in Anastasia gracefully conjures up the world of Imperial Russia. Remarkably, the real Kschessinska was still alive at the time of the ballet’s premiere: aged 98, she had survived the Revolution, emigrated to France and spent her later years teaching ballet luminaries including Maurice Béjart and Margot Fonteyn. She died just months after her fictionalized self had arrived on the Covent Garden stage for one last grand pas de deux, created by Antoinette Sibley and her partner Anthony Dowell.

5 Kommentare zu „What is your favourite pas de deux?“

I danced ballet as child, albeit with little success. Despite this, my passion for ballet and dance has carried into adulthood. I still love to watch ballet performances and would love to share my passion with you.
Schließe dich 1.136 anderen Abonnenten an